Equinor and its British partner SSE have won a contract to develop what they are calling “the world’s largest wind farm” off the UK coast.

The contract involves three sites in the Dogger Bank region of the North Sea, which could together provide up to 3.6 gigawatts of energy – enough to power around 4.5 million homes.

The companies are expecting to begin work on the project in January, with the first energy being delivered in 2023.

Norwegian companies, particularly those on the country’s west coast, are increasingly using lessons learnt from the oil and gas sector in order to establish themselves in this new field.

Norwegian firms are likely to have a particular advantage in developing floating wind farms.

This technology is well-suited for countries such as Norway, where traditional bottom‑fixed wind turbines are not an option due to the depth of coastal waters.

Equinor has already built the world’s first floating wind park off the coast of Aberdeenshire, Hywind Scotland. It also has plans to develop other such facilities.

This includes Hywind Tampen, a cluster of wind turbines that will be used to power the company’s Snorre and Gullfaks oil fields out in the North Sea.

These oil fields typically run on gas turbines, leading to significant CO2 emissions. The Hywind Tampen project, the first of its kind to tie wind power to oil and gas installations, is expected to save around 200,000 tonnes of CO2 every year.

This is the equivalent to taking around 100,000 private cars off our streets. 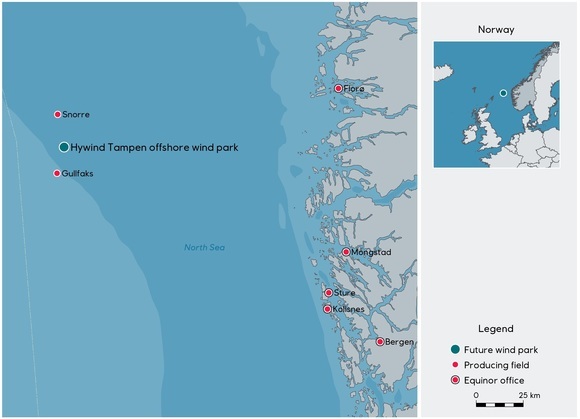 Equinor is planning to use floating wind turbines to power oil and gas installations in the North Sea. Photo © Equinor.

There were celebrations in western Norway on 5 February this year, when Equinor awarded the first contract under the Hywind Tampen project to Gulen Industrial Harbour.

The harbour, based in the Gulen municipality in Sogn og Fjordane county, will be responsible for assembling the 11 mighty wind turbines before they are transported out to the North Sea.

Each turbine will boast a height of 254m – that’s taller than the Statue of Liberty in America – reaching a combined capacity of 88MW.

Equinor and other partners will take a final investment decision on the project in autumn 2019, with work on the scheme expected to begin shortly after this.

However, companies elsewhere in the region are not waiting around for Equinor to open up the floating wind market. Instead, they are developing their own technologies to compete in this growing industry.

This includes Semco Maritime Norway, which is working with the Danish firm Floating Power Plant to design a new floating turbine that generates both wind and wave energy.

The companies have been trialling their windmill design since 2018, and have so far seen promising results for the technology.

Semco Maritime Norway has its headquarters at Hanøytangen, an industrial area within Askøy municipality just outside Bergen. 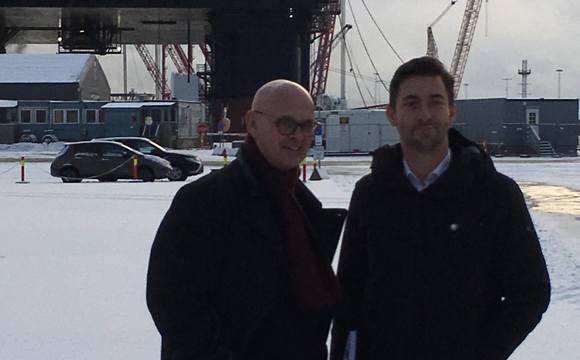 Ole Angell (left) and Lars Halvorsen from Semco Maritime. The company is working on new turbines that can produces both wind and wave energy.

“Being part of this project, we are aiming at gathering competence here in the region to take a position within offshore wind industry,” says Lars Halvorsen in Semco Maritime Norway.

“We have much competence in this area, and with the new windmills combined with wave power, I think we have great potential for developing the sector here.”

With its technology and knowledge from the oil and gas industry, coupled with a strong talent pool, Norway is well‑placed to transform offshore wind into its next big export industry.