Establishing 12 datacentres in Greater Bergen could provide 12,000 new jobs, 54 billion NOK in investment, and 2.8 billion NOK in added value. This was the conclusion of a report presented recently by Caroline Wang Gierloff (second left) on behalf of Menon Economics and COWI. From left: Tore Mong from GreenByte, and Tone Hartvedt and Vidar Totland from Invest in Bergen.

A new report has revealed how the data centre industry could bring billions of kroners, as well as thousands of new jobs, to the Bergen region in future.

Data centres are already a fast-growing industry in Norway, as shown by Google’s recent purchase at Skien, and Volkswagen’s brand-new centre at Rjukan.

The study, “New opportunities for the Bergen Region”, looks at 12 possible sites in Greater Bergen where new data centres could be built. If all of these sites were realized, this could bring 12,000 new jobs as well as 54 billion NOK of investment to the region.

The report – co-authored by Menon Economics and COWI – also shows that data centres could generate nearly 3 billion NOK of direct added value for the region in the next 15 years. 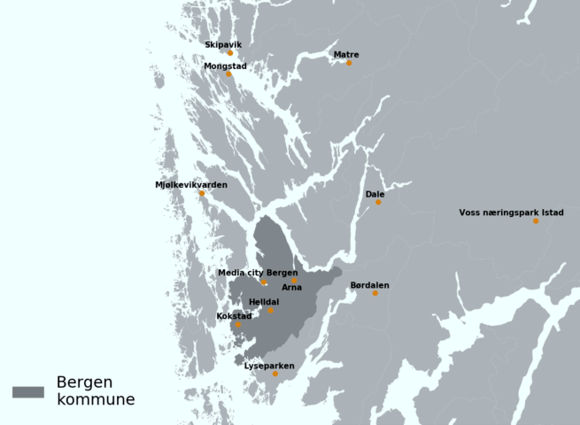 An overview of potential data centre sites in Greater Bergen.

However, these benefits won’t happen by themselves. Individual councils will need to act now to lay the foundations for new data centres.

Tone Hartvedt, at Invest in Bergen, says: «We are currently in the starting phase, with the chance to pave the way for a new industry.»

“For us, it’s been important to look at the types of data centres that are specially suited to our region: these tend to be smaller facilities, with relatively large power requirements.”

“With more knowledge about what these particular centres need, the county council and local municipalities will be better placed to take an active role as facilitators. This covers everything from zoning and infrastructure, to ensuring the right skills are in place.”<

The report shows, for the first time ever, the effects that new data centres would have at specific sites across the Bergen region. It provides data for individual municipalities, the region and the whole country.

The figures from Menon and COWI reveal that over a 15‑year period, overall investment and construction costs could total more than 12 billion NOK.

There would also be 42 billion NOK in energy, equipment and operations costs – adding up to 54 billion NOK of investment in total for the region.

This is in addition to thousands of jobs, the majority within the fields of construction and engineering.

Tone Hartvedt, from Invest in Bergen, explains that the Bergen region would be attractive to smaller “HPC data centres” with higher power needs.

The data centre sector is currently the fastest growing power-intensive industry in the world, and many operators are looking to establish new facilities in Northern Europe.

As a region, Greater Bergen is well-placed to compete for some of these new centres. It can boast abundant renewable energy, low energy prices, shovel-ready commercial sites and good fibre infrastructure.

The region is particularly suited to high‑performance computing (HPC) data centres. These data centres are fitted with supercomputers that can carry out at least a trillion calculations a second, and require a high amount of energy.

GreenByte works closely with Invest in Norway on an international basis, in order to attract new data centres to the Bergen region.

If you’d like to learn more about available data centre sites in the Greater Bergen region, head to the GreenByte website.