A new report has stated that Mongstad could become a hotspot for the sustainable industries in the next few years.

The report by Ernst & Young found that Mongstad Industrial Park would be particularly well‑suited to hosting new hydrogen, wind energy and aquaculture facilities.

The study was commissioned as part of the Greenspot Mongstad initiative, which is aiming to prepare Mongstad Industrial Park for a green and sustainable future.

With its good coastal location, and skilled workforce, and an established cluster of energy companies, the region could attract up to NOK 3.8 billion (roughly $400 million) in green investments between now and 2025.

EY’s report found that Mongstad Industrial Park would be an excellent place to establish a range of sustainable industries in western Norway:

In the longer-term, the industrial park could also play host to:

This is due to a range of factors such as access to industrial land, a supply of CO2 and natural gas, as well as a competent workforce within the process and energy industries. 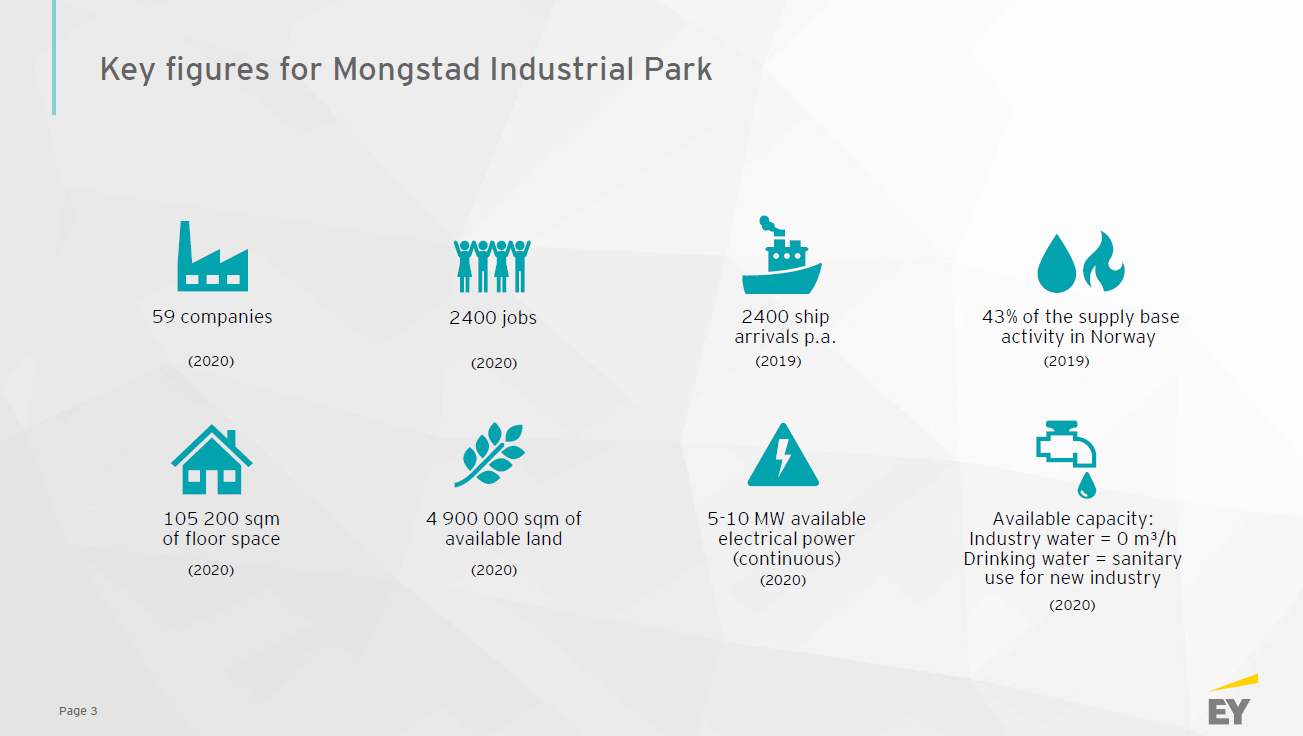 The main drivers behind the Greenspot Mongstad initiative are Alver municipality, Nordhordland Business Association and Industry Development West. The project has been supported by funding from Vestland County Council.

Invest in Bergen is also supporting this project, which will develop the industrial park and create highly-skilled jobs in the region.

“Mongstad is one of the most attractive industrial areas in Norway, and this report shows that it is the perfect place for locating new green ventures,” states Vidar Totland at Invest in Bergen.

“We are looking forward to working with other local partners in order to encourage further sustainable growth and investment in this dynamic region.”

Mongstad could be Norway’s “hydrogen hub”

One of the report’s most interesting conclusions is that Mongstad could act as Norway’s “hydrogen hub” in future, producing thousands of tonnes of the clean fuel every year for ships and trucks.

Hydrogen is expected to play an especially important role in Norway’s shipping industry in coming years, as this sector begins to wean itself off fossil fuels. 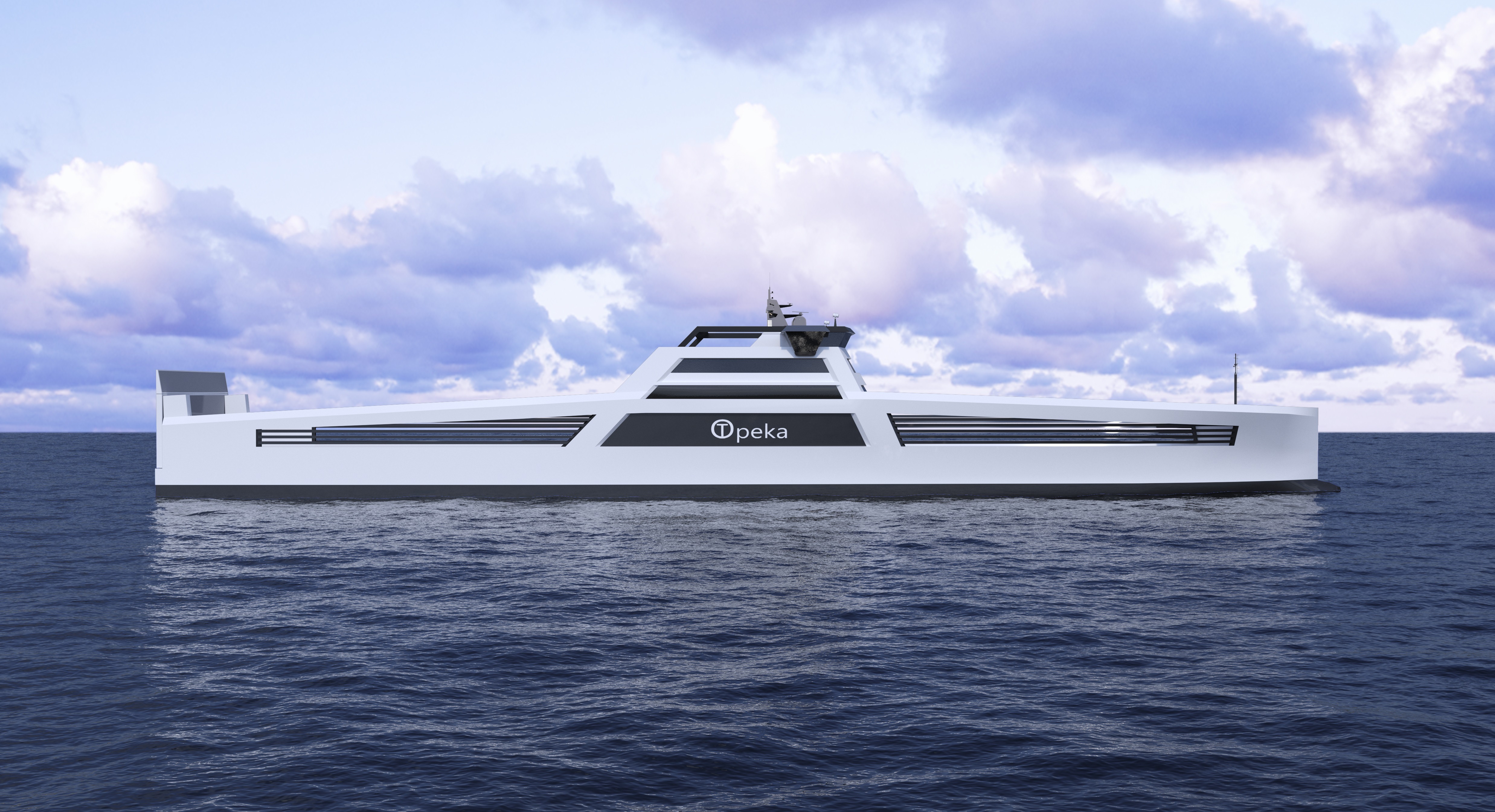 The “Topeka” ship concept (pictured above) could soon be used to distribute liquid hydrogen from Mongstad to ports up and down the Norwegian coast. Photo © Wilhelmsen

A partnership of companies have already announced plans to establish a large-scale hydrogen facility at Mongstad Industrial Park, which should be up and running by 2024. This new initiative will play a key role in the region’s green growth going forwards.

In its first phase, the facility will be able to produce around 4,000 tonnes of liquid hydrogen per year, which will be distributed to ferries, express boats and other vessels along the Norwegian coast.

However, this isn’t the only way that Mongstad Industrial Park is embracing a sustainable future.

There are also plans to establish an onshore wind park to supply clean power to the existing businesses at Mongstad, and support further developments. According to EY’s report, this facility could be operational by 2025.

There is also plenty of space for other companies to join and be part of developing the exciting energy cluster at Mongstad.

Mongstad Industrial Park boasts 4,900,000m2 of land available to new businesses. Around 2,350,000 m2 of this has already been zoned, offering a short time to market. Further areas are in the process of being zoned.

Mongstad is one of Norway’s leading industrial areas, with a good coastal location and a skilled workforce.

The industrial site in western Norway includes many benefits, such as:

TCM offers the world’s largest and most flexible test centre for carbon capture technologies. Private companies from all over the world come to TCM to test out the latest solutions for capturing CO2.

Another company, CO2Bio, is using waste CO2 to cultivate algae, which can then be harvested to make climate-friendly fish feed ingredients.

All in all, there are some green shoots already emerging at Mongstad, and EY’s new report demonstrates that there is a huge potential for further sustainable growth in this region.

If you are interested in joining this growing exciting energy cluster in western Norway, please get in touch with Invest in Bergen.

We can offer practical support to companies who want to settle in Greater Bergen, as well as helping your company to identify the right commercial areas in our region. All of our services are free of charge.