Kitemill has developed kites that can fly up to 1,500 metres into the sky, providing a cheaper and more effective way of capturing wind energy.

A green energy company from Greater Bergen has gained new wind in its sails after receiving €2.4 million in EU funding.

Kitemill is pioneering a new technology that will collect wind energy much more efficiently than traditional turbines.

The company has developed kites that can fly up to 1,500 metres into the sky, taking advantage of stronger and more stable winds at this attitude.

Kitemill’s founder, Thomas Hårklau, says that the grant from the EU’s Horizon 2020 programme will allow the firm to roll out the technology as a commercial product.

“Of course, it is gratifying that we are now given such large funds, but what is even more important is the recognition the European Commission gives to the company Kitemill,” says the founder.

“Our solutions will ensure that EU countries have access to world-leading Airborne Wind Energy (AWE) technology.”

Hårklau has previously stated that his company’s technology can help to open up new opportunities for wind power, in countries that don’t have the conditions to install land-based turbines.

Largest ever grant for Hordaland

Based in the town of Voss in Hordaland, Kitemill currently employs six people. After receiving the grant from the EU, it is now looking to expand the team by hiring further skilled engineers.

The company’s €2.4 million grant represents by far the largest award ever made within Hordaland county under the Horizon 2020 programme.

This is an even more impressive achievement, given that the programme is known for having extremely high standards. Ingvild Kjørrefjord, a Senior Advisor at Innovation Norway, described the process of receiving a grant as similar to “getting through the eye of a needle.”

“This is a local company that is a world leader in its field,” adds Kjørrefjord. “They impressed the jury with their insight.” 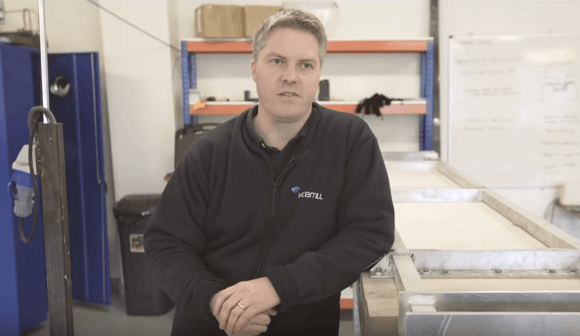 Thomas Hårklau, the founder of Kitemill, believes that his company’s technology will open up new opportunities in parts of the world where land-based turbines aren’t possible.

Airborne wind power is seeing a growing interest across the globe, with countries such as the US, the UK and Germany already testing out this technology.

A range of companies are racing to launch their own kites, balloons and drones in order to harness energy high up in the sky.

This includes Makani, a spin‑off from Google that recently tested its own kite technology on the coast of western Norway.

Despite tough competition such as this, Kitemill are confident that they can hold their own and expand their operation in coming years.

With a major new tranche of funding behind them, it looks like the team from Voss are flying high.