Bryton Shang believes that the Greater Bergen region has a lot to offer startups.

Greater Bergen should hold onto its unique strengths, according to one Silicon Valley entrepreneur.

Bryton Shang recently chose to establish a second office for his company in Bergen, and the founder believes that the region has a lot to offer for start-ups.

This includes a solid base of government support, as well as a friendly business community that is open to newcomers.

According to Shang, these are some of the things that make Bergen "the place to be if you're an aquaculture start-up".

Shang, who has recently been named in the Forbes "30 under 30" list, makes regular trips between Silicon Valley and the Norwegian west coast.

His company, Aquabyte, is on a mission to make Norway’s fish farms work better.

The firm is developing software that can count sea lice on farmed salmon, as well as measuring biomass and fish appetite.

"We're seeing a growing demand for Norwegian seafood, but very limited supply. Unless we can become more efficient, we're going to have a big problem," explains the entrepreneur.

The data provided by Aquabyte can help farmers to improve fish welfare, as well as offering lower costs and greater sustainability.

Bryton believes that part of AquaByte’s success so far is partly down to the firm’s Silicon Valley mentality.

“We have focused on one thing – the software – and have done it really well and really quickly,” he explains. “We want to create a step‑change in how fish-farming is carried out.”

The company has seen rapid growth over the last two years, spurred on by venture capital funding from both the USA and Norway.

The entrepreneur is also eyeing further expansion, first to Scotland and then eventually to other aqua farming nations such as Canada and Chile. 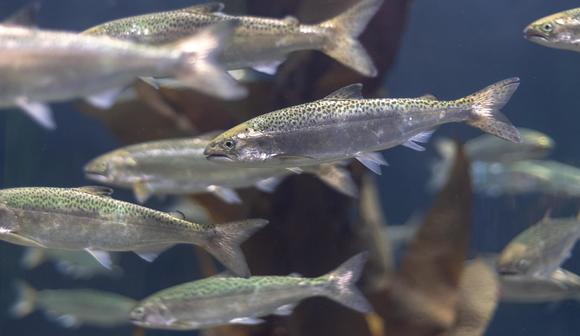 The data provided by Aquabyte can help farmers to improve fish welfare, as well as offering lower costs and greater sustainability.

Yet according to Shang, Bergen will always be the aquaculture company’s “centre of excellence”.

“Bergen is at the centre of the aquaculture world, and it’s the place to be if you’re starting an aquaculture company.”

The founder points to the community of seafood start‑ups at Marineholmen business park, along with the city’s world‑leading research and development environment.

This includes institutions such as the University of Bergen and the Institute of Marine Research, both of which have assisted Aquabyte with vital knowledge around fish biology.

Lastly, the local aqua farming companies themselves have welcomed Aquabyte with open arms.

“There’s a lot of trust here. Fish farms here have opened up and let us test out new technology, which has really helped us.”